Daniel John Jones is a artist and software engineer whose work explores new ways in which sound and technology can illuminate our understanding of the world, translating patterns and data into living musical forms. 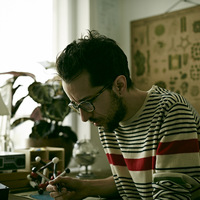 His BAFTA-nominated practice spans topics ranging from bacterial dynamics to network infrastructures, and has been shown at venues including the Barbican, the Museum of Science and Industry, IRCAM, the Southbank Centre, and the Royal Institution of Great Britain.

Most recently, Daniel has been developing computer simulations of orbital bodies as part of Project Adrift (Wired), an interdisciplinary team of artists and scientists responding to the growing challenges of space debris. The work launched at the Royal Geographical Institute in November 2016, and has since been shown at the Royal Institute of Great Britain and the Science Museum.

Through summer 2015, Vespers by Jones/Bulley was installed Southbank Centre, London (May-Sept 2015). Each day, the work composed a full musical score in real-time, drawn from the online activity of the United Kingdom, and plotted on paper using a unique mechanical drawing machine.

Other works include Phantom Terrains (with Frank Swain, 2014), a platform for ubiquitous sonification of wireless network landscapes; Living Symphonies (with James Bulley, 2014-), a landscape sound work that grows in the same way as a forest ecosystem; Global Breakfast Radio (with Seb Emina, 2014-), an autonomous radio station that broadcasts live radio from wherever the sun is rising; The Listening Machine (with Peter Gregson, 2012), a 6-month-long online composition which translates social network dynamics into a piece of orchestral music, recorded with Britten Sinfonia and commissioned by the BBC/Arts Council's The Space; Variable 4 (with James Bulley, 2011), an outdoor sound installation which transforms live weather conditions into musical patterns; Maelstrom (with James Bulley, 2012), which uses audio material from media-publishing websites as a distributed, virtual orchestra; Horizontal Transmission (2011), a digital simulation of bacterial communication mechanisms; and AtomSwarm (2006—2009), a musical performance system based upon swarm dynamics.

Daniel's engineering work includes Chirp, a platform for sharing information over sound, shortlisted for the Design Museum's Designs Of The Year; the 3D audio engine for mobile games Papa Sangre and The Nightjar, nominated for two BAFTAs including "Audio Achievement". He co-ordinated the technical infrastructure for The Fragmented Orchestra, winner of the prestigious PRSF New Music Award 2008, and was more recently a fellow on the Mozilla Webmaker programme.